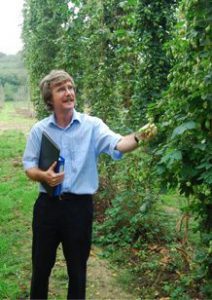 Wye Hops Ltd. is located amongst the commercial hop gardens at China Farm, run by Hop Farmer and British Hop Association member, Tony Redsell OBE. This site was selected mainly due to wilt-free conditions and a possibility for irrigation. For news from Wye Hops, please click here.

Success stories to date include:

A hop breeding programme consists of preparing pollen, making controlled crosses, raising seedlings, transferring seedlings to the field, and collecting, drying and pressing cone samples from the seedlings for analysis.

For historic reasons dating back to the early 1900s, in England male hop plants are grown alongside female hop plants. In the breeding programme, the males are not ‘killed’ but used as parents to develop new female varieties like First Gold. Peter uses the male hop plants mainly for their growth habit characteristics and to provide disease resistance in their female hop plant progeny.

It normally takes at least five years to identify a potential new hop variety and can be a further six years to take it into commerce. The cycle is:

Year 3: First assessment of individual seedlings (based on resin analyses, and aroma assessment)

Year 5: Selection of potential varieties and propagation of material for commercialisation

Year 9: Propagation of materials for planting on farms

The future of British hops

In March 2012, Wye Hops Ltd celebrated a very successful five year anniversary and has a bright future ahead.

Peter Darby associates British flavour notes as being subtle and balanced. Although hoppiness is distinct, there are also fruity and woody notes present but without any one note being predominant. The effect is that you want to have another drink of the same beer; there is no need to change to another brand.

Peter continues with an analogy:

‘English flavour is like a chamber orchestra, the hops giving simultaneously the high notes and the bass notes. In comparison, a Czech beer is more like a full orchestra with much more breadth to the sound, and an American hop gives more of a dance band with more emphasis on volume and brass. The recent New Zealand hops (e.g. Nelson Sauvin) are like adding a voice to the instrumental music’.

Brewers around the world want “something new, something different and something not tried before” – with 31 commercially available varieties and more in the pipeline, it’s time to celebrate Great British Hops in your beers.