The modern hop has been developed from a wild plant as ancient as history itself.  As far back as the first century AD they were described as a salad plant and are believed to originate from Egypt.

Today, the words beer and ale mean much the same, but the word ‘ale’ was originally reserved for brews produced from malt without hops.  This was the original drink of the Anglo-Saxons and English, whereas ‘beer’, a brew using hops, probably originated in Germany.  Hops were cultivated in the Low Countries (modern Belgium and Holland) from the 13th century.

The cultivation of hops was probably introduced from Flanders to England in the Maidstone area of Kent at the end of the 15th century.  Our national drink until then had been ale, unhopped and sometimes flavoured with herbs such as wormwood.  Brewers started to import dried Flemish hops but these contained so much extraneous matter that an Act of Parliament was passed in 1603 imposing penalties on merchants and brewers found dealing in hops adulterated with ‘leaves, stalks, powder, sand, straw and with loggetts of wood dross’.  In those early days, the sole reason for using hops was to preserve the beer in good condition: the bittering effect was reluctantly accepted by Englishmen.

By the 17th century ale (i.e.: un-hopped beer) was no longer popular and beer was the established drink and by 1655 hop cultivation grew rapidly in fourteen counties.  In a successful year, an acre of good hops could be more profitable than fifty acres of arable land, but some farmers would not grow hops due to the erratic yields caused by drought, wet periods and mildew.  Duty was imposed in 1710 and the Act prohibited the use of any bettering agent other than hops in beer, as hops were far more wholesome.  The duty varied from year to year and speculation on the tax became a popular form of betting.

Customers began to ask for a drink that was mixed from two or more casks.  This was a slow process and in 1722 a new beer was brewed that was a combination of three beers.  It was an immediate success and became known as ‘porter’ due to its popularity with London labourers and porters.  This was the first beer that was ideal for mass production and massive investment was required.  Immense profits could be made and porter brewing spread throughout the country.  Paler beer was coming into fashion in 1750 with the middle class and to prevent fraud, a further Act was passed requiring the bags or ‘pockets’ in which the hops were packed to be stencilled with the year, place of growth and the grower’s name; a tradition that continues to this day.

By the 19th century, it was the golden age of the hop industry.  Hop acreage continued to increase until 1878 when it reached its peak with 77,000 acres.  Tastes changed and a decline in the demand for porter and a surging demand for a lighter beer known as Indian Ale or Pale Ale became fashion.  Pasteurisation arrived in the late 1870s and fewer hops were needed as a preservative.  Clean water became more available and this may have reduced demand for beer.  There were only 32,000 acres of land growing hops by 1909 and a renewed import of foreign hops.  This was due to breweries being contracted to brew foreign beers under licence, and thus being required to use the hops stipulated in the original recipe. 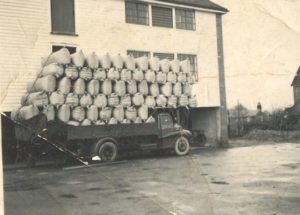 Twenty-three years later and acreage had fallen to 16,500.  The producer-controlled Hops Marketing Board was created to control the flailing industry.  The Board would negotiate a guaranteed price with the growers and the brewers would indicate their expected demand to the Board, resulting in allocated quotas to each grower.  This brought stability and by 1968 acreage had slowly increased to 17,900 acres.  However, in 1982 EEC rules led to its disbanding and the introduction of independent producer groups for the marketing of English hops.

The hop industry was soon to face further problems as Lager gained in popularity and fewer hops were required.  In addition, the seeded hops produced in the UK were purported by competing countries to be of inferior quality.  This has been disproved but the myth caused considerable damage to the British hop industry.

Formerly, hops were grown in almost every region of the UK but they are now confined largely to the West Midlands and South Eastern counties of England.  Because a huge itinerant force of workers was needed to pick the crop by hand, production became concentrated near to the industrial areas of London, South Wales and the West Midlands where the working-class families were glad to be able to spend their annual holidays in the countryside.

Click on the link, to view a short film about families of hop workers in 1959 on holiday for the summer and working in the hop yards.  Twentieth century advances in production and mechanical harvesting have eliminated the need for large numbers of seasonal workers. 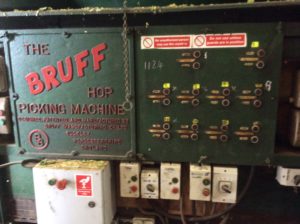 In 1922 the first hop-picking machine to be used in this country was imported from America by a Worcester grower.  Machine picking was not to become widely practiced until the late 1950s as the American machines were not suited to conditions in England and hand pickers were still available.  However, when the change came, it was the West Midlands growers who led the way.  The first British-made picking machine was produced in Martley in 1934 and the two main makes were manufactured in Suckley and Malvern.

Britain’s brewers in the 21st century require a comprehensive portfolio of hops ranging from the low alpha acids of around 4% to higher alphas nearer 20%, as well as being increasingly interested in the individual flavours of each hop variety.  There will always be increasing interest in individual flavours of each hop variety and a need to develop economical hops that are more resistant to disease and requiring lower chemical inputs. 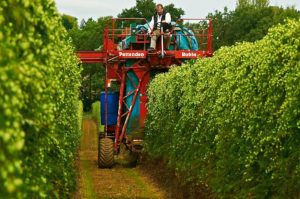 Horticulture Research International at Wye College in Kent joined with England’s hop growers in the 1980’s to anticipate this need and to develop the new category of hops called Hedgerows.  These answer many of the above problems, as hedgerow hops only grow to 8 feet rather than the ‘traditional’ 20 feet, are cheaper to establish, can be harvested at speed by machine, require less chemical input and provide a wonderful playground for beneficial bugs and insects.

For other information on the history of hops and their development, take a look at The Brewing Society’s website.